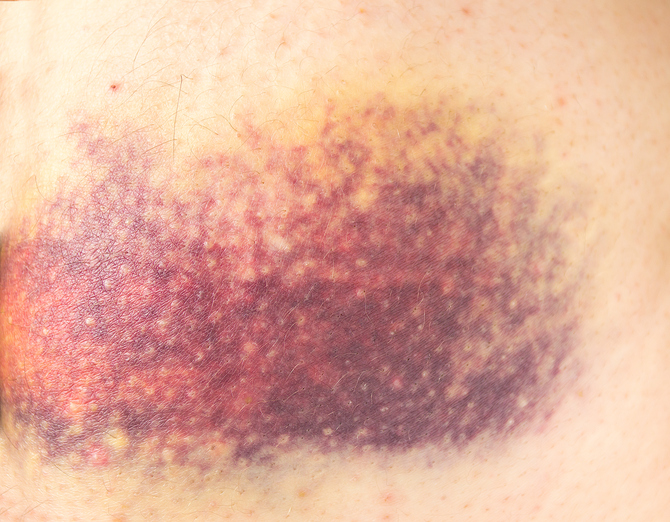 Bruising can have many causes, however, there is always concern when a non-mobile baby presents with bruising. An infant who is cruising around or walking will be more likely to have bruises from accidental causes and the older a child gets, generally the more bruises they will have.

It is thought that with a baby who cannot cruise or crawl yet, accidental bruising is fairly rare and where it does happen a carer will know what the accident was that caused it.

A bruise occurs when blood escapes from a ruptured blood vessel into the surrounding tissue. As blood is red, the mark will usually develop as red or red/purple. As it develops, a bruise will usually turn yellow/green. It should be noted, however, that the aging of bruises is not possible as they react differently from person to person.

Petechiae are a form of bruising that present with tiny spots to the skin (red, purple or brown). It sometimes looks like a rash but is in fact bleeding under the skin.

In a mobile child, doctors will often look at the number of bruises and location of those bruises. For example, research shows that accidental bruising is rare on the hands, buttocks, cheeks, forearms and chest and so bruises in these sites may raise suspicion.

Where there is bruising with no apparent explanation, it is important that medical disorders are considered.

Coagulation disorders are conditions in which the blood’s ability to clot is impaired. This can cause excessive or easy bruising and bleeding.

Connective tissue disorders can also cause easy bruising as they can affect the blood vessels by weakening them and causing them to rupture.