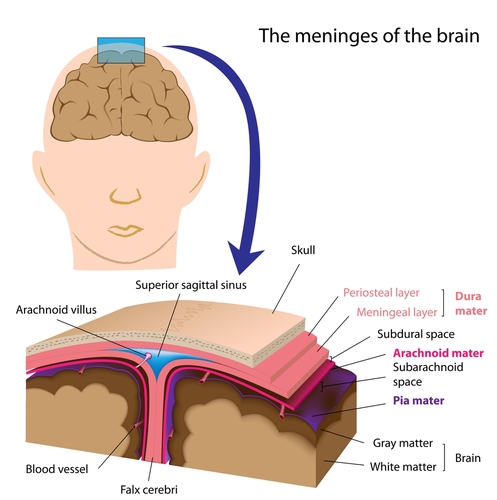 The brain is a complex organ.  One of the intracranial injuries that can arise in allegations of non-accidental injury is a subdural haemorrhage.  It may help to understand a little about how the brain is formed…

Subdural haemorrhage refers to blood in the potential space between the arachnoid and the dura.  Subdural haemorrhages are strongly associated with trauma.  They do not occur spontaneously in children and so, in the absence of a bleeding disorder, some pre-disposing malformations or very rare metabolic disorders, medical opinion is that they are caused by trauma (the allegation usually being shaking with or without an impact).  It is thought that the veins connecting the brain to the skull (bridging veins) are torn and this is what causes subdural haemorrhages or subarachnoid haemorrhages.

Bleeding on the brain cannot be dated with precision.  Fresh blood is referred to as an acute bleed and denotes blood that is less than 10 days old.  Sometimes, the fresh blood fails to absorb back into the brain and causes an inflammatory response within the subdural space which then creates membranes within the blood.  Small re-bleeds can occur causing the blood/fluid to increase and develop over a period of two weeks or more.  This is known as a chronic subdural haemorrhage (old; over two weeks). An infant’s skull bones are supple and not yet fused; this means that the skull often expands where there is a chronic SDH thus relieving the pressure on the brain.  As a result, the child may not have any symptoms of brain injury other than a slightly larger head (often unnoticed by carers).