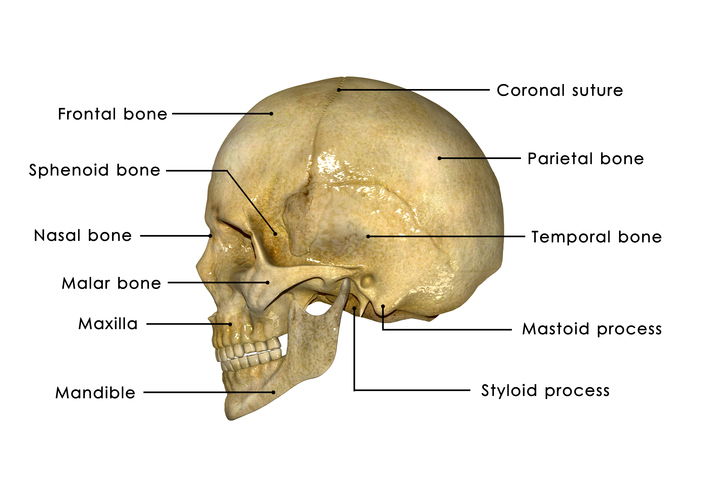 Where a skull fracture is identified in a child, there will be concerns about how it has been caused and whether it was a result of non-accidental injury.  If a non-accidental injury is suspected within care proceedings, often a medical expert (neuroradiologist) will be instructed to consider the injury and any explanations for it.  The report produced by the expert can be a daunting and confusing read, especially where medical jargon is used.  I hope the following may explain a little about the skull and skull fractures.

The different bones of the skull can be seen in the diagram above.  As the largest bone, the parietal bone is the most likely bone to fracture in an accident.  Subsequently, suspicion often arises if it is one of the other bones that has fractured.

Unless there is some kind of underlying bone disease, a skull fracture means that there has been an impact to the head of some kind.  Whether this impact is a result of an accident or NAI will need to be fully explored.

There are different types of skull fracture including:

Single Linear – a single fracture in one line.

Multiple or complex – this means there is more than one fracture line or multiple components to one fracture (such as ‘branches’ from it).

Depressed – a fracture where the normal shape/curve of the skull is affected by the bone being depressed inwards.

The radiological changes in a long bone (for example the femur) give indications of how old a fracture might be.  The skull is very different and a fracture here can look the same for 4-6 weeks.  This makes any attempt to date it very difficult and dating on radiology alone is therefore unreliable.

Doctors will often look for clinical signs of injury to assist them with providing approximate dates of when the injury occurred.  Scalp swelling is one of these clinical signs and although it is not always present, a lack of swelling does not exclude the possibility of a fracture.

Swelling can happen almost immediately after an incident or it can appear or grow over the next 2-12 hours.  Swelling can last several days, possibly up to 4-5 days.  Thus, if swelling is present, doctors can usually narrow down the timeframe for the injury to the last few days.

A skull fracture may go entirely unnoticed to a carer or even to a doctor if there are no clinical signs.  A skull fracture can only be seen on an x-ray and so if there is no reason to x-ray (no swelling/bruising) it may not be found.  The assumption, therefore, that a parent or carer ‘should have known’ is not always a reliable one.

What cases a skull fracture?

For a skull to fracture, there must be trauma of some kind (even if a medical condition reduces the level of force). It is thought that usually an impact is the cause.

Skull fractures are currently estimated to occur in 3 % of births (that is, the birthing process itself will cause the skull to fracture).  A recent 2012 study which looked at this showed that such a fracture could be due to forceps, vacuum or even normal vaginal delivery due to pressure against the maternal pelvic bones.  It is likely that this 3% is an underestimate as a baby would only be x-rayed if there was a clinical reason to and so some skull fractures may have gone unnoticed.

A lot of children fall.  We are often told in court that we know from experience that a lot of children fall but they don’t all end up in A&E with a fracture.  It is, however, unknown how many actually have a fracture as a result of a fall as very few infants/children are x-rayed (an x-ray or CT scan would only be done if clinically necessary).

There have been many different studies into the causes of skull fractures.  The difficulty of course is that experiments cannot be done on live infants and so most of the studies are reviews that collate information about children who have attended hospital with a fracture or having had a fall.  A 1969 study found that 47% of infants had falls during their first year of life but very few sustained any serious injury (only 4).  The conclusion drawn from such studies is that many children have falls but few sustain a significant injury.

One unusual piece of research carried out in the 1980’s involved dropping deceased babies on their heads and examining the results.  The purpose was to look at the degree of force needed and height needed to cause a fracture.  Whilst helpful in demonstrating that skull fractures can be caused as a result of a fall, it has several flaws, the main one being that a living child would fall differently due to movement/reflexes.

A recent study in 2010 looked at falls that had taken place in hospital (therefore witnessed by hospital staff).  Of the small group of infants considered, 4 (out of 7 that had had an x-ray) had sustained a skull fracture.